In a presentation at the NQA Conference in Phoenix this year, Mark Reinhart presented the idea that the principals of our Qigong practice are all presented in the Yin/Yang or Tai Chi Ball Symbol.

Let us explore the circle. What does it mean to us in our Qigong practice? 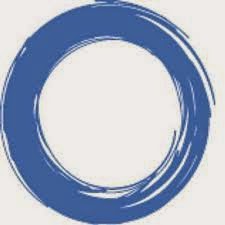 With the concept of oneness we often use the word universe (uni - verse = one verse) when we describe the connection.

As we explore the circle in our practice here are a couple of quotes to further consider:

‘We join spokes together in a wheel,
but it is the center hole
that makes the wagon move.

We shape clay into a pot,
but it is the emptiness inside
that holds whatever we want.

We hammer wood for a house,
but it is the inner space
that makes it livable.

We work with being,
but non-being is what we use.’

‘In Qigong pratice the value of the One is supreme.  When you become aware that everything is connected, it is easy to relax and trust.  wen all the complexity of life —good and bad news, good and bad days, opportunities and challenges — is perceived as an express of the One, it is easier to feel safe; you can relax and stay clear in your practice.

~ The Healing Promise of Qi (Roger Jahnke)
Posted by Leslie Cook at 5:36 AM No comments:

Focus: Being a Thermostat and Controlling Your Stress 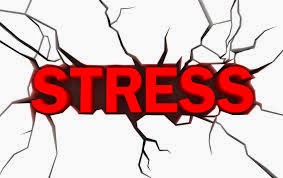 I have heard that saying before, I don't know who originally wrote it.  But I was reading an article by Dr. Kenn Gordon where he was discussing being reactive or proactive?  And I thought about Stress.  Isn't Stress just really a reaction to situations around us.  A reaction where we allow ourselves to begin to boil - the stress thermometer begins to rise.  So how can we turn this around and be proactive.  If we learn to be centered or to come back to our center, we have the potential to control our reactions and become the thermostat versus the reactive thermometer.

So how can we use our Qigong principals to achieve this.  What if, when we notice that we are getting stressed about something; we begin by centering ourselves with the three intentions. And then take three deep breaths and notice if we are being reactive or proactive.   By choosing our reaction or even choosing not to react to the situation we become the thermostat.

Taking time out of our day for a short practice - maybe just the Vitality Series can recenter us and allow us to find that peace within each of us.  The more often we practice the shorter time it takes to become the thermostat, find our center and make our proactive choices in life.

We often talk about the Tai Chi symbol representing the balance between Yin and Yang energy.  This balance occurs in our bodies with energy from the earth (yin) in our lower Dan Tian and energy from the heavens or universe (yang) in our upper Dan Tian.  And then the two mixing in our heart center.

This symbol is universal, it represents the mix of energy in our universe, the duality that we live and exist in.  The symbol even represents the different seasons that we experience throughout the cycle of the year.

We are currently approaching the Winter Solstice on December 22nd, 2014.  At this point we will have the strongest force of Yin energy surrounding us.   If you look at the diagram of the Yin/Yang symbol (Tai Chi) you will notice this is the point of the most black on the symbol.  At Winter Solstice, we begin to bring Yang energy back into our universe a little more each day, until we reach Summer Solstice at which point there is the strongest level of Yang energy.  This cycle is seen in nature and in our bodies.  The seasons are also represented in the cardinal directions on earth, in the northern hemisphere they are as follows: 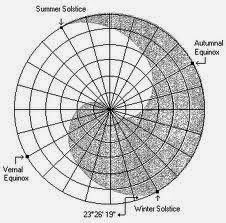 Posted by Leslie Cook at 7:42 AM No comments:

As we approach Thanksgiving, I find myself drawn into a practice of gratitude with my Tai Chi and Qigong. The universe had given me many blessings, but one of the greatest had been the opportunity to share the healing practices of Qigong and Tai Chi.

One of my favorite gratitude practices is the Inner Smile. It is a meditation that can be done seated, standing or with movements that resonate with you.  Michael Winn shared this with me at a summer retreat. After connecting with heaven and earth using the three intentions, think about something in your life that you are truly grateful for - past or present. Feel the beautiful warmth from that feeling of gratitude and notice the gentle smile that emerges; that is the Inner Smile. Then, begin to move that sensation of the Inner Smile around your body. I like to begin with the organs. As you come to an organ, imagine smiling at the organ, accepting it as it is, thanking it for it's service to your body, and imagine the smile embracing it like a hug. Then, you can move on to another organ, you can thank anything is your body - bones, skin, eyes, voice, etc. . Just have fun embracing yourself with the gratitude of the Inner Smile.

I want to thank all my students and facilities that participate in Qigong and Tai Chi with me. I am so grateful for your support that allows me to share these wonderful practices.

Have a wonderful holiday season filed with gratitude.

Leslie
Posted by Leslie Cook at 5:19 PM No comments:

A friend of mine shared this beautiful mantra with me this week.  I have embraced it in my daily Qigong practice and wanted to share it with you.  Our practice of Qigong is just not when we set aside time to do a set of movements, it is in each breath we take, each movement we make, the words we speak, what foods we choose to nourish our body with, and how we act and respond to events in our daily practice.

So I welcome you to embrace your Qigong practice during every moment of the day. Let's all begin with a mindful breath and then make the choices that honor ourselves and those around us.  Let your light shine and the chi flow!

Posted by Leslie Cook at 7:50 AM No comments:

Over the past year, I have been presenting the Qi Break to several groups and I am always pleased to hear feedback on how useful this simple practice can be.  So let's enjoy a Qi Break together.  It takes only a few minutes and you can do all  four practices or just a piece of the Qi Break.

Blithering:  I prefer to stand up, but you can also be seated.  As you take a big inhale, lift your arms overhead and as you exhale let out a baaaa sound as you imagine you are a tree trying to shake off your leaves, let your arms and body shake until your arms are along your sides.  I like to do it three times, you can make any noise that you like. On the last one, continue to move your entire body, while you visualize opening all of your joints, releasing any tension they may hold.  This movement is also called spontaneous Qigong. When you stop moving, just notice any sensations that you might feel.

Flowing Posture: Remain in your wonderful posture from the three intentions. If seated, as you inhale, lift your heels up; as you exhale, lift your toes up. Rocking your feet with the breath.  If you are standing, as you inhale, shift your weight toward the balls of your feet.  As you exhale, shift your weight back towards your heels.  Then, seated or standing you can add your arms. Allowing your arms to float up with each inhalation (palms facing the sky) and with the exhalation, letting them float down (palms facing the earth). The movement of the arms can be small or big, just listening to your body and seeing what it needs at the moment. Flowing posture helps to stimulate the flow of lymphatic fluid throughout our body; so you can imaging vitality traveling to each cell in your body as your practice this movement - enjoying the movement with the breath.

Heart Centered Breathing: Coming back to the belly breathing in the three intentions.  Place a hand on your belly and just notice the belly breath.  Noticing the pace of the breath, the softness of the breath and giving gratitude to your lungs for all the work they do without us ever asking them to breath - bringing in vital oxygen to nourish our cells and releasing toxins that your body no longer needs.  Then, place the other hand in your heart area and listen for the beat of the heart, noticing the pace and giving the same type of gratitude to our heart.  Then, bringing your awareness to the differences in the pace of the heart and the lungs and giving gratitude to the two of them for working together to nourish and cleanse our bodies.  Maybe even smiling at them.

I hope you enjoy this practice!  Namaste. 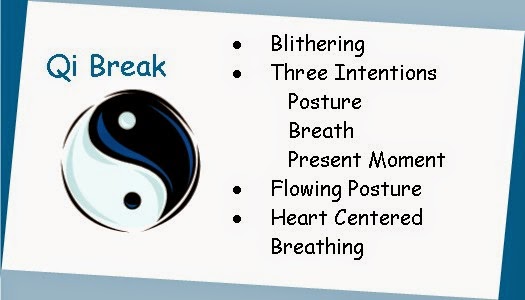 Posted by Leslie Cook at 8:18 AM No comments:

Take a moment and explore the range of motion of all the joints in your body.  As you move through the joints explore a sensation of softness and openness.  I like to imagine that I am in a pool of water and the water is supporting all my joints.  As I move each joint I imagine it being supported by the water.  You can begin with your fingers, add your wrists, your elbows, shoulders, spine, waist, hips, knees, ankles all the way down to your toes. You may find it easier to be seated when you do you ankles and toes.   This is a great form of spontaneous Qigong - make it a beautiful and fun dance.

Then, you can transition into the rest of your practice feeling this wonderful openness of the joints.  As you move focusing on releasing any tension that you find in any of your joints. Imagine the energy in your body flowing through your joints.  You can continue this practice in your daily life.  Find time each day to just take a moment and explore the openness of your joints; maybe even smiling while you do it - giving gratitude for your flexibility.

Bruce Lee has a beautiful quote:

“Notice that the stiffest tree is most easily cracked, while the bamboo or willow survives by bending with the wind.”

Posted by Leslie Cook at 8:12 AM No comments: